Wireless Power Transfer (WPT) is a concept of enormous potential, the principle of which was established as early as 1826 when electromagnetic waves were theorised to be the wireless carrier of an electromagnetic signal. Over many years, this line of thinking gathered momentum and scientists like Nicola Tesla were able to further prove the validity of the theory, speculating on how this groundbreaking idea could be used to benefit the world. In 2017, technology has advanced to a point where wireless technology is viable, and wireless charging, in particular, is being brought forward as the new standard through which to power up our devices.

Set for release on the 22nd September, Apple have brought three new variants of their iPhone to market – the 8, 8 Plus and X – each aiming to revolutionise the way in which Smartphones can be used. Amidst a host of new design features, including expanded memory, a larger screen, and more powerful camera, the new iPhone range also includes wireless charging capabilities, governed by the Qi (pronounced “Chee”) wireless standard. Although likely to be overlooked by many prospective owners in favour of the more immediate selling points of these super-phones, Qi is set to become a staple in the way we interact with our devices.

To coincide with Apple’s adoption of wireless charging, California tech company Scosche Industries have announced a brand new addition to their award-winning magicMOUNT range which combines their popular mounting solutions with Qi technology. The magicMOUNT Charge is a dual-function product which will allow users to mount their smartphone in their vehicle via a powerful neodymium magnet, whilst the phone is simultaneously charged wirelessly by the coils inside.

[Want to know more about Scosche? Read our feature here]

With a StickGrip suction base, tried and tested on the classic range of magicMOUNTs, and a 4-axis adjustable angle, the product allows for multiple fitting and viewing angles – perfect for even the most unusual car interiors – and gives the driver the safety and convenience benefits associated with a flexible smartphone mount. Now, with Qi charging built-in, Scosche aim to capitalise on what will certainly be the future of charging as Apple continue to eliminate physical ports, connections and wires from their devices. 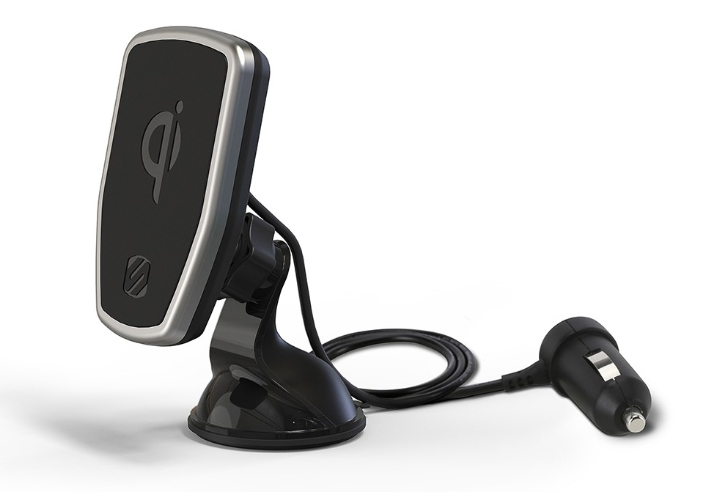 Learn more about the magicMOUNT Charge

Qi is named after the Chinese word for ‘energy flow’ and uses a charging pad, combined with a receiving coil built into the host device to transmit current without wires. With the new iPhone, Apple have joined a host of manufacturers currently working with the standard including Asus, HTC, Huawei, LG, Motorola, Nokia, Samsung, BlackBerry and Sony. Apple’s involvement with the technology is believed to help push the innovation even further, encouraging the industry to think about the ways in which we can ‘think’ without wires. The company has announced a future expansion on Qi, Apple AirPower, a wireless mat which will be able to charge an iPhone, an Apple Watch and AirPods at the same time.

As European 12V distributor for Scosche, Connects2 are proud to bring to bring this product to the UK and Europe. You can read more about Scosche’s magicMOUNT range here

2 thoughts on “The Future of Charging: Qi”